So much of what goes on in any economy is psychological. Because thinking drives buying drives markets, up or down, buying or selling. If you sell something, that’s actually a buying decision. You’re getting rid of your stock and you’re buying cash. You’re buying cash with your stock, or you’re buying stock with your cash. It’s always a buying decision, no matter what it is and it’s psychologically subject to changing very quickly. The point is psychology turns very quickly, and then people will be in denial about it for a while.

And that happens time and again, we saw that just not that long ago. We saw that during the COVID. The market dropped 35% Very quickly, and then the narrative became the economy is going to completely shut down. This is the worst that we’ve ever seen.

And just a few months later, the narrative completely changed and everyone started piling on to stocks. So much so that in certain areas of the market we had what you would call a bubble, especially things like Spax and a few other tech stocks that just went public. So the narrative went from being extremely pessimistic to extremely optimistic and then fast forward a year. Just recently, the narrative, especially with those high-growth tech stocks, became extremely negative, where some of those stocks dropped 70-80 % or 90% from their peak. So the narrative changes, it’s all driven by psychology. When the psychology shifts from being negative to being positive, people start buying and vice versa. That’s really what drives markets at least in the near term.  You could say in the longer run valuations and fundamental stock market but in the near term, it’s all psychology.

Psychology is thinking and thinking is what drives actions.  The narratives are always shaped by fundamentals short-term, but then the narrative kind of gets a life of its own, and then that drives a momentum one way or the other. You look at these tech stocks…the valuations that they had coming into the new year then you start having interest rates go up. That was the point where the narrative changed based on fundamentals.   It gets to the point where all that bad news is priced in, but the narrative is still continuing. The market realizes that the bad news has been overdone.

Let’s look at interest rates. Remember, three or four years ago? Everybody said that 10 years going back to 4%. All of the major brokerage firms put out pieces on “what to do in a rising interest rate environment.”

With bond ladders…you’ve got a little bit maturing each year. So ladder your maturity is one year, two year, three year four year have bonds coming off every year. Wow, what a new idea. Those have been around for a long time. But they act like it totally just started this. Then bring it up to today. And the one driving the narrative is the Fed… “We’re gonna raise interest rates six times over the next year.”  I don’t recall ever hearing the Fed, lay it out for you that far into the future. Under Volcker under Greenspan even under Bernanke, it would be more of a stealth move. Sometimes it would be between meetings. They come out and raise interest rates 50 basis points, and inter meeting drop one day, totally catches the market off of balance.

We live in a more highly bureaucratized top heavy world today than we even had five to 10 years ago. The Fed now is this big body made up of more and more appointees based on social justice, race, gender, and nothing to do with economic background. It’s more virtue signaling. As to who the body of the Fed is. This guy in Atlanta, Rafael Bostick, they quote him all the time. He makes these statements that just bear no relationship. He acts like he’s speaking for the Fed chairman.  They act like the ones driving the economy but the fact is, they’re talking about four more hikes… maybe five. The 10 year has already rallied from 3.11% down to 2.7%.

Why is it if the Fed says we need higher interest rates… the market does the other thing? Why? Because you cannot superimpose your value system and your narrative on top of a living, breathing, dynamic market made of people. Not only do they not learn this, but they’re also doubling down on the proposition that interest rates can be controlled.

It used to be that it was what the Fed did that mattered and now it’s what the Fed says that matters.  The market has been taking its cue from that. Now, whether that’s a good thing or not …obviously the market listened to the Fed.

It’s possible that with inflation… we’ve seen the worst.

it is because a lot of the inflation that we saw, was driven by supply factors, which can self-correct.   When we say supply factors that means there’s a shortage of commodities, or for certain commodities that often are not getting from point A to point B,  That’s a problem that can raise prices of that increase prices of that commodity but eventually businesses will figure out a way to get commodities from point A to point B. We are starting to see the inflation figures and there are signs that inflation is moderating. Whether it is moderate and goes back to what it was in the last decade where it ran between one and 2% or, or is that is today’s inflation benchmark level higher. Just because we have shortages, not only in commodities but also in labor and D globalization going on.

For this and more…listen to the full episode of The Tom Dupree Show! 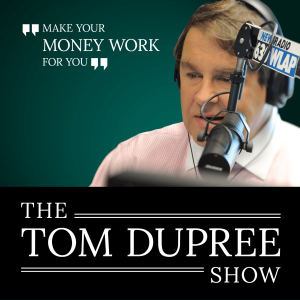